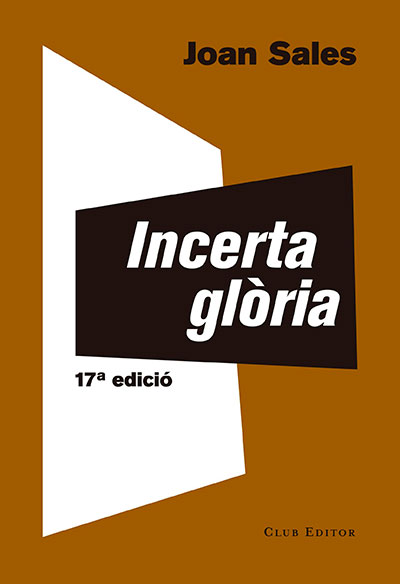 Spain, 1937. Posted to the Aragonese front, Lieutenant Lluís Ruscalleda eschews the drunken antics of his comrades and goes in search of intrigue. But the lady of Castel de Olivo—a beautiful widow with a shadowy past—puts a high price on her affections. In Barcelona, Trini Milmany struggles to raise Lluís’s son on her own, letters from the front her only solace. With bombs falling as fast as the city’s morale, she leaves to spend the winter with Lluís’s brigade on a quiet section of the line. But even on “dead” fronts the guns do not stay silent for long. Trini’s decision will put her family’s fate in the hands of Juli Soleràs, an old friend and a traitor of easy conscience, a philosopher-cynic locked in an eternal struggle with himself.

Joan Sales, a combatant in the Spanish Civil War, distilled his experiences into a timeless story of thwarted love, lost youth, and crushed illusions. A thrilling epic that has drawn comparison with the work of Dostoyevsky and Stendhal, Uncertain Glory is a homegrown counterpart to classics such as Homage to Catalonia and For Whom the Bell Tolls.

A KIRKUS REVIEWS BEST BOOK OF 2017

“A masterwork that will seduce anew with its passion, humour, pathos and the all too-human spats of anger.”—Eileen Battersby, The Irish Times

“In light of Catalonia’s current push for independence from Spain, the Catalan novelist Sales’s Uncertain Glory — originally published in 1956 — could not be timelier. Longings for separate nationhood have roiled the area for generations, and in this new translation Bush offers a fresh look at the region through the context of the Spanish Civil War, a conflict English readers may best know in literature through writers like Ernest Hemingway and Muriel Rukeyser…. a symphonic novel — full of philosophical, religious and literary meditations.”—Lisa Russ Spaar, The New York Times Book Review

“Catalan writer Sales tells a multilayered story of loves, faith, friendships, and ideals tested by the Spanish Civil War in this novel banned by Franco’s censors, then published in 1956 after the author’s return from exile….Philosophical and earthy, tragic and funny, honest, raw, superb: Sales makes Hemingway seem thin, even anemic, in comparison. This book is a rich and highly recommended feast.”—Kirkus, starred review

“Magnificent…Peter Bush [has] done a great service in reviving this Catalan classic.”—Maya Jaggi, The Guardian

“Wonderfully readable…Uncertain Glory is a major novel that expresses the disillusion of a generation who fought a just war against fascism, but lost their idealism and youth.”—Michael Eaude, Literary Review